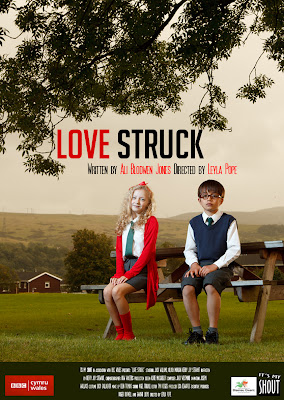 Earlier in the summer I created animated sequences for a short film called Love Struck. This was a live-action film for the BBC directed by Leyla Pope who saw my work in Wales and asked me to get involved. I usually work in puppet animation but for this project I created 2D drawn animations which in the film are used to represent a small boy's imagination. You can read more about my process and the film on the Love Struck website. 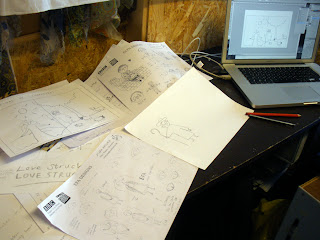 My set-up in the studio whilst animating

The film premiered in Wales at the beginning of November to a warm reception, was broadcast on the BBC last week, and you can now see the film on BBC iPlayer until Tuesday 20th December 2011 here: http://www.bbc.co.uk/i/b017hf5h 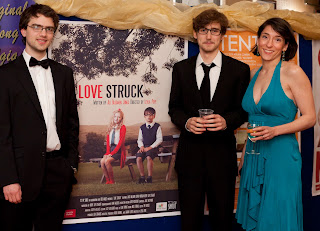 Composer Jack Westmore, me, and Director Leyla Pope
at the Love Struck premiere
Posted by Joseph Wallace at 11/27/2011 1 comments

My good friend Péter Vácz from Hungary who I trained with on the Animation Sans Frontières course (09-10) has posted his beautiful graduation film Patakiskola online. The film was developed on the ASF course along with my graduation film, The Man Who Was Afraid of Falling along with a bunch of other projects. We both gave each other a lot of support and input into each other's projects and I helped Peter with the English translation of the original Hungarian poem.


The film is made using a mixture of stop-motion and cut-out computer animation using scanned textures. You can read about Peter's process on his blog here and see more of his work on his vimeo page. He is currently working on his post-graduate film at MOME in Budapest at the moment, keep your eyes peeled! 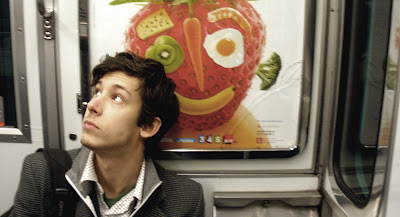 I'm kind of an animation filmmaker, storyteller and illustrator. I have done my Bachelor degree in Animation in 2010 and still doing the Master on MOME Moholy-Nagy University of Art and Design. I took part of the ASF Animation Sans Frontières - The Animation Production Workshop in 2009 which was one of my greatest experience in animation. I attended the 15-week 3D Professional Character Animation course at The Animation Workshop in Viborg in 2011. I studied Graphic design in Secondary School of Visual Arts in Hungary from 2003 to 2007. Acting makes me happy. I play the cello since I was 8 and it also makes me happy. I play in a symphonic orchestra and had 2 solo concerts.

I have just come from the Watershed in Bristol having watched Une Vie De Chat, or A Cat in Paris as the English release is titled. This is a film from the French company Folimage, creators of Boniface and Bisclavret and I am really blown away. I'd been excited about this film for a while after seeing the trailer as I'm a big admirer of the directors Alain Gagnol and Jean-Loup Feliciolli and love their previous short films. I was hoping to catch Une Vie De Chat somewhere on the festival circuit but luckily it happened to have a one-off screening at the Watershed as part of their Fresh Flicks film festival for young people. The film is being distributed in the US by GKIDS but as of yet has not found a distributor for the UK which is all too often the case with some brilliant European films. 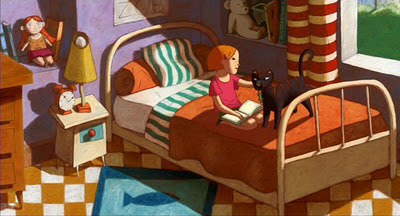 The film tells the story of Zoe, a quiet police commissioner's daughter, and her cat, who by day is a sleepy pet and by night is a thief's accomplice. Whilst her mother searches for the criminal who killed her husband, the same crooks kidnap her daughter and it's up to Nico, a renegade jewellery thief to save Zoe from the gangsters. The duality of the cat's life gives the audience a unique perspective on the story and the social layers in Paris and the film moves from apartments to the Notre Dame across the beautifully realised rooftops of Paris. The film is visually breath-taking. Every frame is richly rendered with oil-pastel backgrounds and the characters have a raw graphic energy to them; imagine a Picasso painting animated. The use of light, shade and colour is stunning and the films feels incredibly tactile and three-dimensional whilst having a wonderfully illustrated look to it and almost the feel of a graphic novel. This is an animated representation of Paris that will go down in animation history along with the likes of Pixar's Ratatouille and Sylvain Chomet's La vieille dame et les Pigeons. 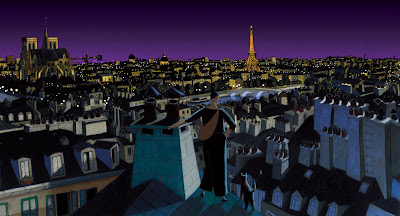 I don't usually do films reviews as such but I think this film is a really important example of animation being exploited for its inherent qualities in a brilliant way. Whilst the film might adopt many codes and conventions of live-action cinema (filmic language, music etc) this could not have been made as a live-action film. The quality of movement, the striking aesthetic, the expressionistic presentation of Paris, the illustrational feel and use of light is exclusive to animation and this is one of the most interesting looking 2D features I have seen in a long time. See the trailer below.

I will be at Encounters International Film Festival next week with my graduation film The Man Who Was Afraid of Falling which is in competition. This is a great festival I've attended a few times before. In 2007 my short animation Showdown at Yohoko Valley was shortlisted for the DepicT 90 second film competition and screened at Encounters. This year I'm looking forward to: UK/Europe Animation Schools Discussion (particularly interested as I've been fortunate enough to study at both, inc. briefly Gobelins), John Kricfalusi (creator of Ren & Stimpy), Future of Short Film Talk (how do we get them made? Who can fund them?), NFTS Cinematography masterclass (great speakers) and... Studio AKA talk with Philip Hunt (can't wait). 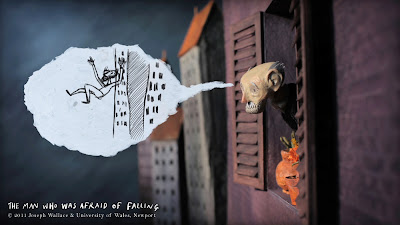 The Man Who Was Afraid of Falling (2011) © Joseph Wallace

My grad film will be screening at the Arnolfini on Weds 16th at 6pm (£7) and Fri 18th at 12pm (£5). For more details on the screenings click here. I'll be knocking around the fest for most of the week with RCA pin-up Peter Millard who's new film Hogan is also screening. If you're around, come find us, we'll be the ones drinking free champagne in the corner.

One last thing, I am also now 'tweeting'. Trying to get my head around all this #@linkylinky business but you can follow me on it here: twitter.com/#!/josephwallaceuk
Posted by Joseph Wallace at 11/11/2011 0 comments 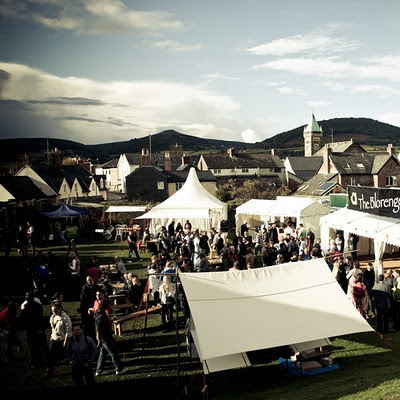 I recently made a film for Fork Magazine about the Abergavenny Food Festival. Chris Collier (my partner in filmic crime) and I spent the weekend in September running around with Publishing Director Cathy McKinnon filming talks, tastings, stalls, interviews, demos, discussions and parties. Joanna Blythman of Observer Food Monthly said of the festival, “Abergavenny is to food what Cannes is to film...”, it was certainly a great festival with many great speakers and lots of fantastic food!

The film will now be used to promote both the festival and Fork mag, both virally and through screenings. Thanks to the festival for their help in making the film and letting us get up close and personal with our cameras! 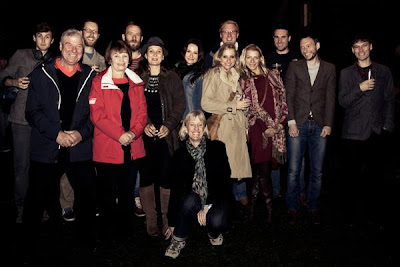 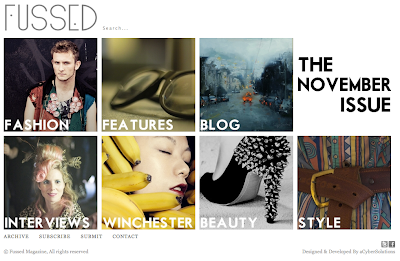 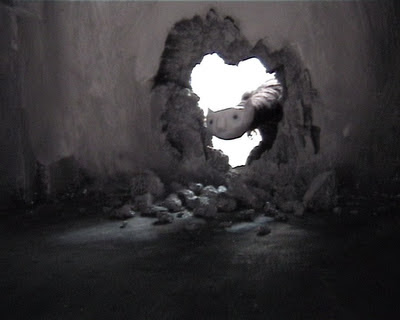