Ian Matthews showed us a sting for E4 that his mate from Calon had made. It’s a very nice ident – incredibly stylish, trendy and has a charm only stop motion could evoke. He brought in one of the puppets on loan from the owner for us to have a look at. The design was relatively simple compared to what we have been making. They were a great example of purpose-built puppets; the models were built to execute a specific performance, the characters only needed to be seen from the waist up - so that's the only section they made, they only wave their arms and bounce a bit, so make them economically so they perform well without the extra effort of building a whole, complete, articulate puppet.

My armature is nearing completion. I managed to catch up quite quickly having been away after spending a day in the workshop. A little more soldering and gluing to go and then I should have a working armature. Ian very kindly gave us a comprehensive guide to building a stop motion puppet – a summing up of his teachings over the last month or so. I think he’s really inspired the group to become more serious about stop motion and get out there and try making some more models. I’m now anticipating the animation section of the training which starts this week.

Whilst on the subject of stop motion and its qualities I also wanted to share the work of Alison Schulnik. A graduate of CalArts, her work really plays on the materiality and performativity of clay in all its richness and tangibility. She has a very identifiable painterly style throughout her plastic arts and motion picture work. Check out her website here.

When I returned from Germany a book had arrived for me in the post. Hans Christian Andersen’s Fairy Tales, translated by Paul Hamlyn, but more importantly illustrated by Jiří Trnka. The book first came out in the late fifties and the version I managed to get hold of from the net was published 68. The book contains some really brilliant illustrations, from what I can tell they’re mostly made from coloured pencils and watercolour, which Trnka used a lot of designing his characters. There’s so little material on Trnka available I was lucky to snatch this whilst I found it; it’s great to have some hard copies of some of the wonderful work he made. Now all I need is for a comprehensive collection of his films on DVD to be released…

Click on images to enlarge them
I have just discovered that Jiri Barta, master Czech animator who created brilliant stop motion pieces such as Krysař (The Pied Piper of Hamelin, 1985) completed a stop motion puppet feature film in March of this year. The film is entitled Na půdě aneb Kdo má dneska narozeniny? Or In the Attic or Who Has a Birthday Today? in English.
His last film was a rhythmic CG piece which I wasn’t too sure what to make of but from the look of this trailer his latest film looks quite brilliant. There are a few different techniques in there and some really nice puppet animation. I hadn’t heard anything about this at any of the festivals this year but perhaps it will get around a bit next year. I hope so; I would love to see it.

Studio visits and the end of part one

The last day of ASF part 1 we spent visiting two big German studios. The first was the relatively young but extremely talented  award winning Studio Soi. This company was founded in 2002 by

graduates from the Filmakademie and they work across a range of disciplines although most of their output consists of 3d CG films. These are beautifully crafted, earnest, poetic films with real heart. They hark back to a more nuanced way of filmmaking where the shots are longer, the editing more precise and the imagery symbolic, whilst at the same time feeling very fresh and contemporary.
The studio was a large, mostly open plan space with drawing

boards, computers and displays scattered everywhere. Amazing imagery covered the walls, the studios design is fantastic and for the most part is done by one guy – Jakob Schuh. Their latest project, an adaptation of classic children’s book The Gruffalo, is  commissioned by the BBC, stars a host of British stars as the voice talent and look absolutely beautiful. They used a mixture of stop motion sets with CG characters which look very tactile and clay-like. From the preview we got to see (straight from the cutting room floor so to speak) this blend of the two forms is seamless and the storytelling came across as economic yet epic.

Studio Soi’s Carsten Bunte, Jakob Schuh and Torben Meier
The second studio we visited was Film Bilder in Sttutgart. This company has been around for a while and has a reputation for producing a wide range of work from the animated sequences in Tom Twkyers brilliant Run Lola Run to Andreas

Hykade’s sexually charged Ring of Fire. The studio is situated on the top floor of a very tall building in the centre of Stuttgart with stunning views of the city. We were guided around by Thomas Meyer-Hermann, the studio head, who gave an insight into the philosophy of the studio and how it has lasted so long, making both experimental short films and more commercial work. The presentation of work he gave was varied and vibrant. He introduced us to ‘Tom’ which is a quite hilarious children’s series they do.

Despite a night of joyous celebration, a large meal with the staff and some dancing, we all left the Filmakademie with heavy hearts, not wanting to leave this company of people. But we won’t be apart for long, we all fly out to Budapest on Sunday for the next part of Animation Sans Frontieres – The Animation Production Workshop.

An article from Bristol Evening Post.
Unfortunately not entirely accurate but publicity nonetheless.

One of the highlights of the past few days was an improvisation workshop with Dörthe Eickelberg. We looked at theatrical improvisation, creating characters, walks, physicalities and how these can be used for storytellers. I spent a lot of my theatrical trainging doing this kind of work so it was great to go back to it and relate it to filmmaking and creating characters and stories for animation. It's a very free, creative way of working and also really helped the group to bond. I think these techniques are also useful for bringing together a team, a group of people working on a film, discovering a common language and perhaps, more importantly establishing a sense of humour.

We had a really interesting session with Kim Bjørnqvist who's background lies in the cut-throat world of advertising and he had lots of entertaining stories to tell us. We had him for two days and the time was really spent looking at models for effectively developing and realising ideas aswell as pitching and presentation. We looked at structures from Disney and other companies and various methods of thinking, target audiences and research before consuming plenty of post it notes for huge ideas generation sessions. 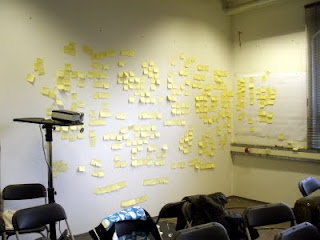 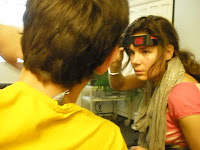 Another interesting presentation was about stereoscopic 3d, existing and emergent technologies, what this means for cinema and how it can be harnessed and used effectively within animation. This session was taken by François Garnier, a leader in this field who joined us after a shoot with Wim Wenders in another part of Germany. He talked a lot about the science and technicalities of how stereoscopy works and it's interesting history. It turns out that the basic 3d image has been around since photography began and that filmmakers such as Méliès, Eisenstein and Hitchcock all made stereoscopic films.
He gave us insight into how 3d work is being used in theme parks and the kind of complicated experiences that are being created, the results are stunning and we watched several stereoscopic films as part of the presentation, some made by his students, some visualization from theme park rides as well as 3d animated films. 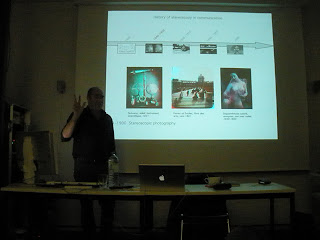 He had a lot of interesting ideas on the future of the technology saying "3d is sometimes not the best way to tell a story but rather to experience the story". He did not seem to think that 3d is the way forward for all cinema. He said that the craze we are currently experiencing is transitory and that the technique will find its place more in augmented reality, instalation and other forms as well as cinema. The day really got me thinking about the various uses for this technology and he actually gave us a relatively simple demonstration of how to make a stereoscopic film using the old red and blue glasses method as opposed to the new polarized 3d which he also took us through. Note to self: DIY stereoscopic stop motion student film? 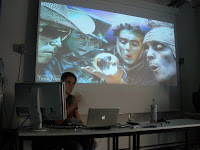 The last workshop was with Alex Mayhew who interestingly was a researcher at the International Film School Wales and made some work there. He was talking to us about media strategies and ways of thinking about content travelling across various platforms and how these inform each other. We had a workshop in the afternoon where we generated ideas on these grounds and then pitched them as projects. All this pitching practice is great and I really feel like I'm getting a lot from what I'm learning.

Image: Aardman Animations
In other news Wallace and Gromit are celebrating their twentieth aniversary, and as part of the celebrations The Culture Show in UK will be broadcasting a special episode live from Aardman's studios in Bristol. Further information here.
Posted by Joseph Wallace at 11/05/2009 0 comments