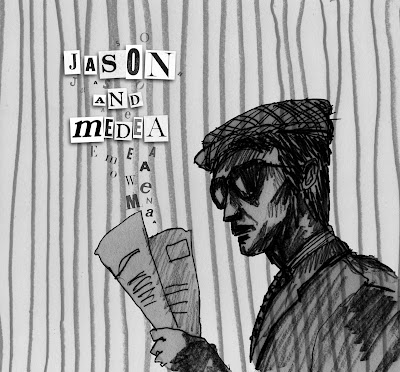 A quick piece of pro-mo visualisation I did for Jason and Medea (working title) a new show from Bristol Old Vic Young Company, directed by Tid. The piece will be a large ensemble production and is currently in development. The treatment transposes the greek myth to the crooked underbelly of 1960s London.
Pencil and digital collage.
Posted by Joseph Wallace at 5/29/2010 0 comments

After much anticipation, Kino International has announced the release of The Complete Metropolis. Fritz Lang's sci-fi masterpiece is in my opinion one of the most important films ever made; it broke new ground and took cinematic storytelling to a new level. The film was made in Germany in a fruitful period in-between the wars; around the same time as other classics such as The Cabinet

of Dr Caligari. The film pioneered some incredibly complex special effects calling upon photography tricks, mirrors, miniatures and stop-motion animation. At the time, all of the arts in Germany were richly connected and very much fed-off of each other and Metropolis drew heavily upon the aesthetics of abstract expressionism. The production values are simply stunning for the time and the influence of Metropolis reaches out across contemporary cinema from Tim Burton’s Batman to Ridley Scott’s Blade Runner and a more obvious homage in the recent La Antena by Argentinean director Esteban Sapir.
Above: the crew casually prod toy cars along the false-perspective roads for a stop-motion scene.


Fritz Lang’s wrote Metropolis with his wife Thea Von Harbou and the films epic production techniques were inspired by American working methods he was exposed to on a press tour for his previous film Die Niebelungen. Lang was fully aware of the films colossal ambition from the beginning, in fact it was his intention to create the biggest film to be made in Europe. It was shot outside Berlin on a huge lot belonging to UFA (Universum Film Aktiengesellschaft) and featured an incredible 36,000 extras. The story of Metropolis is a tale of two worlds, of class and rank and of a man and a woman whose love bridges the gap in society. It also features an underground factory, a mad inventor, a bitter father and a huge flood. I’m hesitant to talk too much about the plot, just watch it, it’s brilliant!

The film has changed shape and form continually throughout its lifetime. Metropolis premiered in Berlin in 1927 after which the film was re-edited by German and American studio execs in a hope to make it more commercial. Despite the tampering, and Lang disregarding the new cut, it went down in cinema history. Strangely after this initial release it disappeared for several years. Next, in 1984, it was re-discovered, re-mastered, re-coloured and re-scored with disgusting bright colour-washes and a cringe-worthy 80s score. Finally in 2001, with help from film archives all over the world, Martin Koerber supervised a restoration which was thought would be the final, most comprehensive version. Missing footage was replaced with explanatory title-cards and the film was reunited with its original stirring score by Gottfried Huppertz.

However in 2008, the Museo Del Cine, in Buenos Aires, found a negative copy of Fritz Lang’s original vision containing the missing 25 minutes of footage. The new scenes, which make sense of the film’s staggered plot, were carefully restored and added to the 2001 renovation by the Murnau Foundation who deal with all Lang’s works. This new 2010 restoration took about a year to complete and we now have a print which is a definitive version of Lang's original film, an ultimate director’s cut if you like.

The Complete Metropolis, Lang’s comprehensive, fantastical epic, is now enjoying a tour of theatrical screenings before heading to DVD, the film’s final resting place in its full form for all to admire.

Here are my newly pressed and printed showreel DVDs, just in time for FMX festival in Stuttgart, Germany this week. 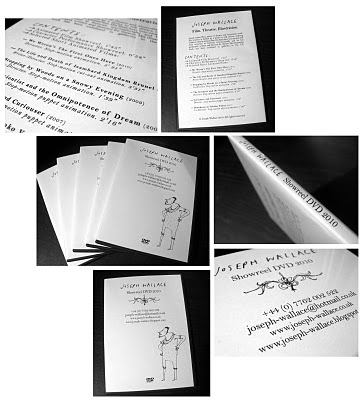