A good friend of mine came down to Wales to do a three day stop-motion masterclass with students at International Film School Wales at the end of May. Richard Haynes is an animator and director who spent a great deal of time at Cosgrove Hall up in Manchester and is now at Aardman on the feature Pirates after having worked as an animator on the Shaun the Sheep series. I met Richard at Annecy festival a few years back and it was nice to catch up as he took us through an intensive character performance course.

Due to time constraints and resources we didn't have 3d puppets but were instead working with paper cut-outs and clay, focusing on movement, gesture and timing. The crash course included acting and performance workshops, timing exercises, walks and even pixillation so was a nice well-rounded opportunity to brush up on skills. There was a small group of us from BA and MA and I think everyone got a lot out of it. Richard was a helpful mix of both critical and enthusiastic and the masterclass was a nice end to the second year at the film school. 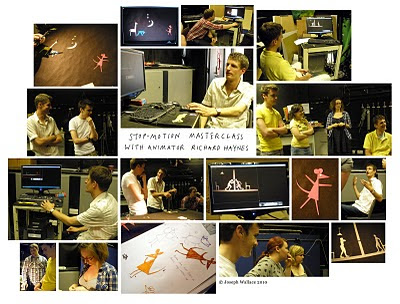