I am very excited to announce that my graduation film from Newport Film School The Man Who Was Afraid of Falling has been nominated for a Bafta Cymru. It's up for the 'Short Form and Animation' award. I've written a bit more about it on the Falling blog.

I'm delighted about the nomination, as well as being massively encouraging it's also wonderful recognition for the film and the talented crew with whom I made the film. The awards ceremony will take place on 30th September at the Wales Millennium Centre, full details of the 2012 nominations here.
Posted by Joseph Wallace at 9/21/2012 0 comments 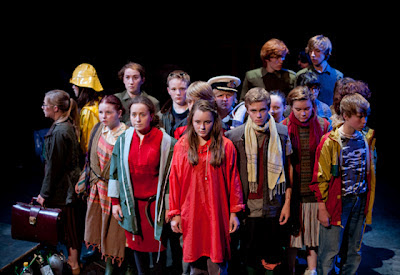 After finishing co-directing The Life After I went straight into running the summer school at Bristol Old Vic. The summer school is a course that happens every year and invites young people to come and work with the Outreach team to create a new piece of theatre in two weeks. There are places for technical team as well as performers and the course is a lively introduction to the world of theatre-making and performance. BOV says this about the course on their website.


Come and spend two weeks of your summer holidays working with a team of vibrant and professional young artists, creating and devising your own production which will take place in Bristol Old Vic's Studio. Open to all abilities and with the option of working either behind the scenes or taking centre stage, Summer School promises to be an exciting, fun packed fortnight. 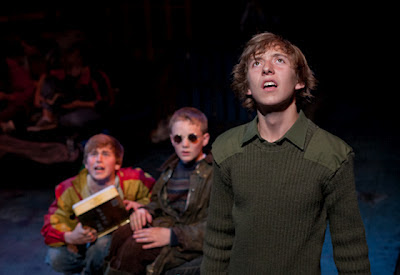 My aim with summer school is always to get to know the ensemble and find out what they're interested in through training, games and workshops and allow them to form the piece of work and lead the research and development. The 2012 group were a political bunch and we created a piece about climate change featuring an imagined future exploring the effects of global warming. We spent five days learning skills and training together as an ensemble and then made the show in the last five days.

The story begins with a great flood and follows various stranded and disperate characters and their stories; a blind man on an island of rubbish, a scientist on a raft, a family torn apart by the waves. As  flawed and struggling government officials try to keep control, characters are reunited and begin to rebuild their lives. The piece was told using ensemble movement and visual storytelling aided by larger than life characters and choral speech. Alistair Debling, who has made music for much of my theatre work, created an evocative score reminiscent of eastern music and performed using a loop pedal and various instruments. The eclectic design and costumes were created by Ruby Spencer and Harriet Hill-Payne and the show was beautifully lit by the young technical team. 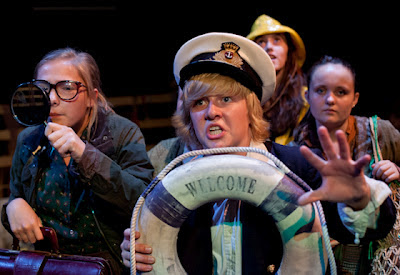 Back in May I created album artwork for regular collaborator Kit Wilson. Kit and I have known each other since school and used to make little animations together on the kitchen table. We both had the Aardman Book of 3D Animation and would spend hours making models and shooting little films. I remember one about a volcano, one about a dinosaur attacking a city and one attempt at lip-sync that went horribly wrong. Now based in London after studying at Trinity College of Music, Kit works as a composer, musician and sound designer for film and theatre and also tutors music students. Kit's music is not quite like anything else and is massively diverse whilst retaining a unique voice. The music is not necessarily conventionally cinematic or filmic in it's sensibilities and this is one of the reasons I love it. There's something about the feel and tone of the music which compliments the visuals perfectly. 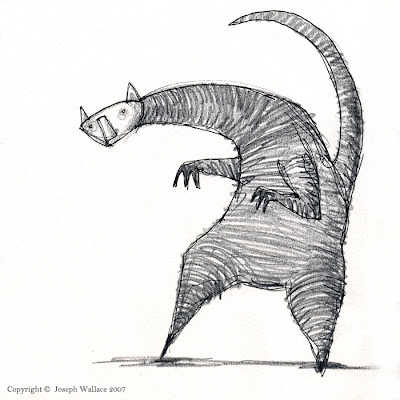 The collaborations between Kit and I have taken various forms and adopted different methodologies. When we made Curiouser and Curiouser in 2007 I gave Kit sketches, concept art, storyboards and diagrams and the music was written before shooting had completed. Essentially when I came to cut the film together Kit had created the music and I composed the footage to the music. The Scientist and the Omnipotence of Dream (2008) was the complete opposite where I gave Kit very little direction but simply handed him the final cut of the film and let him respond musically to the images. There's something magic about that stage in the process where a piece can become more than the sum of it's parts and the various elements gel together to form something new. In The Man Who Was Afraid of Falling(2011) there was a lot of bouncing material back-and-forth in terms of story and visuals as well as music. I gave Kit a handful of titles to compose musical sketches around; 'the anticipation of falling' and 'Ivor's plants'. These tracks created the basis of the tone and feel of the film's music. I think there's a creative affinity that comes from working together over and over and a language that evolves from loving and growing up with the same stuff.

Music always plays a large part in my work whether it be live-action film, animation or theatre. Much of the animation work I make doesn't include voice and the music tends to act as a dialogue of sorts; conveying a sense of characters or telling the narrative musically. Elizabeth Westcott's visceral music and soundscapes for my live-action dance film Swarm (2010) does exactly this and really tells the story as much as the visuals. The soaring strings and plucked violins create a diverse texture which the images then sit upon. Most of the composers I work with will be remote and there are a few valuable meetings plotting ideas and sharing thoughts on the music before the real work is done in isolation. I remember sitting with composer Theo Jamieson discussing the music for The Life And Death of Isambard Kingdom Brunel (2009) and Theo suggesting the music should somehow embody the industrial revolution, in the end he titled the track The Factory and the rhythm and energy of the music helps drive the narrative of the film and give a sense of Brunel's prolific working life. In We Weren't The First Ones Here (2010) Jack Vaughan's score was evocative and hugely characteristic. The challenge here was to avoid detracting from the recorded voices of the actors whilst tying the fragmented episodes together. The music embodies the characters and their relationship to the house.

I made the artwork for Kit's last album This is All They Left in 2009 which can be seen here. The new album deals with themes of memory, reality, dream and insanity. I listened to snippets of work in progress and had lots of ideas and notes from Kit. The album is nearly finished and the artwork is below. 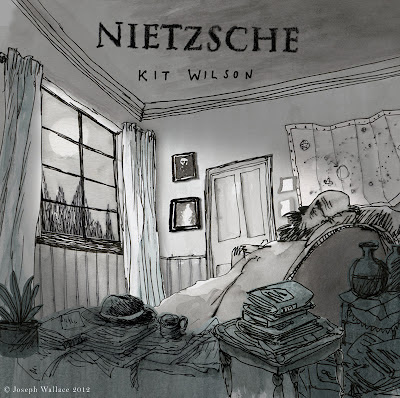 And here's a little video of the artwork being put together in Photoshop (I've always wanted to do one!).

Kit is a writer and musician and has composed for film and theatre. Kit studied music at the University of York and Trinity College of Music in London. His works incorporate song writing and large-scale electro-acoustic structures and often explore the relationship between organic and electronic elements. Joseph and Kit have been making films together since their childhood and through numerous collaborations have developed a unique creative affinity and a natural working methodology.