In other vaguely Czech animated news, Jan Pinkava is working on a feature film with Laika (presumably stop-motion as they shut down their CG department). Pinkava has had a very interesting career and is a truly international artist. He was born in Prague in 1963, a time when Švankmajer was making his first films, and the Czech film industry was active and fruitful with artists like Frantisek Vlacil and Milos Forman leading the way. Pinkava’s family moved to the UK in the late 60s and it was here that he was educated and started to play with animation.

He won an award for a short film of his on the BBC show Screen Test which brought him a lot of attention. Interested by the potentials of new technologies, he then went over to Wales to study computer science in Aberystwyth and stayed until he got a PhD. After a brief stint in London he was picked-up by Pixar in 1993 and made some award-winning commercials as well as working on their features. Geri’s Game, Pinkava first short at Pixar won the Oscar, as well as numerous other awards and really established him as a director. This gave him the impetus to begin developing a story of his into feature film. The story was about a rat on the streets of Paris who dreamed of being a chef…

This would of course later become the brilliant Ratatouille, but not without some turbulence. It’s unclear what really happened, and the Ratatouille DVD Extras provide little answers, but Pinkava was replaced as Director by Brad Bird, hot off the success of The Incredibles. Jan stayed briefly, demoted and then quit Pixar. Brad Bird is currently working on a live-action adaptation of the 1906 earthquake in San Francisco called …1906. The exciting news regarding Jan Pinkava is that we should soon see more work from this skilled craftsman with the Laika film. I’m not sure if this is anything to do with the new features that Henry Selick is directing as I understood he had left Laika and was now working with Disney/Pixar and John Lasseter on creating at least three new stop-motion feature films. Many British animators over here are already packing their bags getting ready to go to the states for something. Time will tell.

I recently stumbled across the blog of Zoe Brooks, a community regeneration professional, who divides her time between the UK and Czech Republic. She writes about life in both countries, the culture etc. Inevitably she had touched on puppet animation and the cinematic traditions. But it was a post about an old castle that reminded me of something that happened to me a while ago…

I was in the Czech Republic a few years back and was keen to see if there were any museums or exhibitions displaying remnants of the rich puppet animation scene. This is a part of animation history that has long fascinated me and the works of Karel Zeman, Jiri Trnka, Břetislav Pojar, Jan Švankmajer and more recently Aurel Klimt, have proved a huge influence on my work.

After some lengthy research in internet cafés and the lobby of my hostel in Prague, I found out about the Museum of Czech Animated Films at Kratochvile Chateau or 'Pastime Castle' as it roughly translates. This was a permanent exhibition of works including a screening room, artwork, designs, puppets and sets from the past to the present. It sounded incredible and I got highly excited about what was going to be the singularly most inspiring trip of that year. The only problem was that this castle was quite far away… and by far away I mean it was outside a small village called Netolice literally in the middle of nowhere.

The train journey, or rather three train journeys were set to take 6 hours to get there from Prague central station. Unfortunately I missed a connection and it took 9 hours. Never mind, I was too eager to care. I arrived at Netolice after having taken a train where I was the only passenger and had some difficulty explaining to the driver what an Inter-Rail ticket was as he spoke no English.

I looked to the back of my hand where I’d drawn a map from Google… After a trek through a field in slightly the wrong direction I spotted the Italian-looking chateau down in the valley. I arrived at the entrance and the gentleman at the desk looked blank at my Czech greetings and presented a girl who spoke English. The conversation went a bit like this:
“Hello! How much is does it cost to go to the Museum of Animation?”
“Oh, that closed down a few years ago”.
*Stunned Silence.*

Apparently it had gone to a private collector and was now in storage. Very disappointing and unfortunate but it was still a beautiful guided tour around the castle. You can see a write up of the exhibition when it actually existed over on Animation World Network.

I've just done a few quick, little portraits of some of the Animation Sans Frontières participants for the new brochure. This is a course in Animation Production that I have recently completed. These illustrations were done over night and the others will be by Péter Vácz. 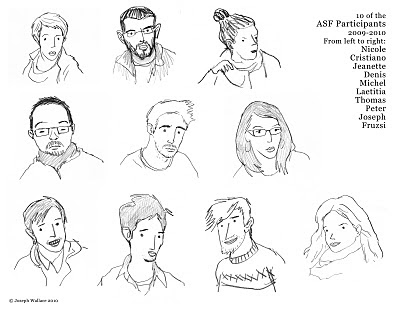 Animation Sans Frontières participants 2009-2010
Below is a bit of character design for a piece of puppet theatre for children I'm working on with Bristol-based artist of many talents Christopher Collier. 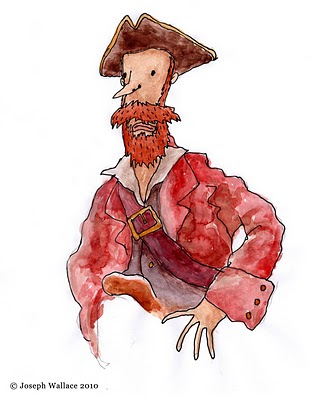 As you can see it's about Pirates and is currently in development.
Posted by Joseph Wallace at 4/21/2010 2 comments

A few weeks back I went to Calon’s stop-motion studio for the day to do some animating under the brilliant supervision of my mentor, the animator and director Ben Halliwell. Ben has animated all over the country on all sorts from The Wombles and Fireman Sam to Koala Brothers and Fantastic Mr Fox. We were doing some character performance exercises and it was time well spent. It was actually the first time I’d animated with a ball and socket puppet which was heaven. Ben watched the results and picked up on little things in my animation that I might miss and shared some of his wealth of experience. A valuable day, Ben’s very generous and a real genuine bloke.

Some images from the day (click the image to see in more detail).
Here’s a picture of Ben on the set of Calon's Igam Ogam which he directed.